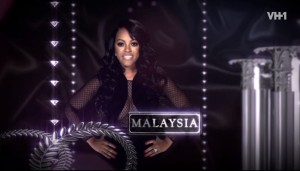 I’m a little shocked that Malaysia is still on the show but she is a fan favorite. She is one of the few in the series to be actually more than a Baby Mama. She is married to Jannero Pargo and the two have three children. She named her three beats Jewelry line after them. They represent her three heart beats. It’s a children’s jewelry line.