How Much is Draya Michele Worth in 2014? 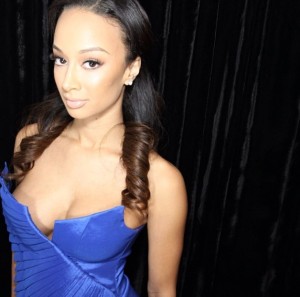 This is about as close to a precise estimate of how much Basketball Wives LA star Draya Michele is earning from her clothing line Mint Swimwear, modeling, and even child birth. Draya popped onto the scene in February 2011 when she first appeared in . Back in the day video models made over $5,000 per video shoot. That was the minimum for the leading girls but in the 2000s the video budgets were in sharp decline and so was the pay for the models. Most video girls can expect to earn $500-700 per video. Draya’s asking price was $1,200 a day for each video shoot. Her eleventh video was Fabolous’ “Leaving You”

In the beginning of her career as a men’s magazine model Draya earned a small $650 for each shoot until she started getting covers. Michele wanted to build her notoriety so she had no problem taking a smaller fee than other models to get the front page. Â Following her appearance on Basketball Wives King Magazine reportedly paid her $8,000 for the cover and story.

Her salary as a main cast member on Basketball Wives LA has doubled since her debut on the show. She was bought on the show in the middle of filming season 1 and offered $40,000 for compensation. Following the show’s initial success VH1 granted the returning cast members raises. Draya was paid $120,000 plus an undisclosed amount for bringing her former friend Brooke Bailey on the series. For season 3 Draya reportedly asked for big money and VH1 had no problem granting it paying her $170,000 while her friend Brooke Bailey was cut from the show for asking for “too much”.

Draya has even gotten major pay for club appearances. She earns nearly $15,000 for hosting parties and events at night clubs and has even asked for a fee for promoting clubs via her twitter. For her 29th birthday party she received offers from several lounges in West Hollywood to Â pay her $10,000 to throw her birthday party. But she took the big money route and spent $3,500 to rent out Philipe Chow in West Hollywood with Orlando Scandrick.

Draya has been called all sorts of names for her child neglect allegations. But Draya’s been laughing all the way to the bank with her son Kniko who she apparently gets $40,000 a month in child support from former NBA player Gilbert Arenas. Up until 2011 Arenas had been sending Draya money for their lovechild avoiding the paternity test and public scrutiny since he was already married and had children by Laura Govan. Since the media had gotten word of their relationship she was advised to go to court and get official child support payments. From a man with a $22 million a year contract she took advantage and was awarded some serious monthly payments.

On her own Draya’s net worth is an estimated $400,000. Â But her boyfriend Orlando Scandrick is worth over $30 million. She can probably put her money away for the time being or just get pregnant and collect more child support.